One of the central tenets in money management is that cash is not the place for money that is not earmarked for transactional purposes.   Not only does a cash position lose its real purchasing power over time, but the opportunity cost of holding cash is quite apparent in times of good market returns.  We’re all familiar with the studies that illustrate the drag on returns to the extent an investment portfolio doesn’t participate in the market’s best performing days.

However, data as to the impact of avoiding the market’s worst days is less widely touted in the investment community (although it is easy enough to search out and offers a compelling argument at that).  Certainly there is value in avoiding exposure to a market decline.  Additionally, there has to be value in the opportunity of being able to put cash to work during times of lower market multiples.

A recent article in the Wall Street Journal’s Money Magazine reported that the well-known investment firm GMO LLC had built up cash levels in its mainstream investment portfolio to 50% of assets earlier this year.  According to James Montier, a member of the firm’s asset allocation team, they had concluded that most other investment opportunities – particularly in the western markets – were too expensive and investors were likely to lose money after inflation from current valuation levels  (http://online.wsj.com/news/articles/The Case for Cash 9202013 ).

Montier published a white paper on this topic in November, 2012, and it’s an interesting read (The 13th Labour of Hercules: Capital Preservation in the Age of Financial Repression  — James Montier).  Before diving in however, it’s important to appreciate a couple of key premises in GMO’s intellectual framework.  First, risk is understood to be less about volatility and more about the permanent impairment of capital.  Second, GMO’s models are developed within the context of mean reversion; i.e., the forecast period incorporates a return to “normal” conditions.

Developing upon concepts conceived by John Hussman (http://hussmanfunds.com/), Montier thinks of a target cash allocation as the intersection of two opposing investment goals within a simple two asset model (stocks and cash):

Essentially, Montier explains this tradeoff to juxtapose the relatively certain loss of purchasing power against the less certain, but far more damaging risk of capital loss during times of highly valued markets when forecasted future returns are low.  (Note, you can see these functions together in a chart in Montier’s piece on page 5). 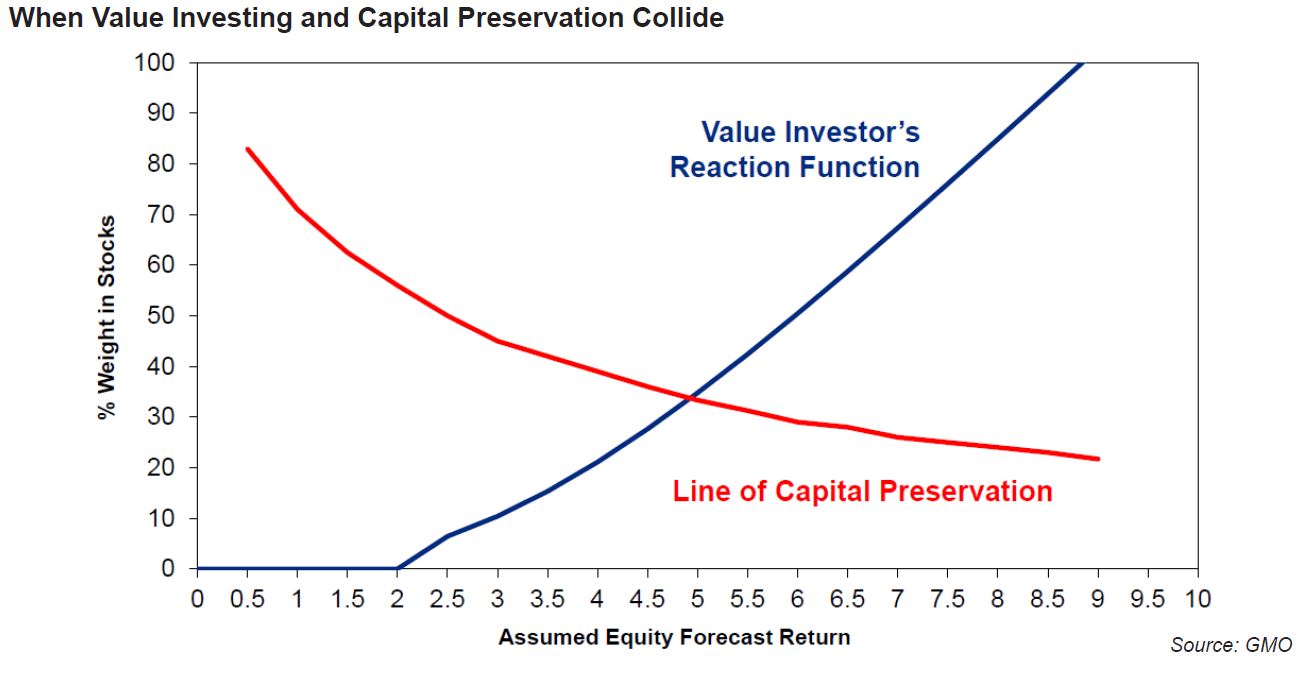 As the markets increasingly tend to adopt a “risk on” or “risk off” tenor, we see the effects of major players who opportunistically use cash as an asset, as well as using it as a comparative valuation benchmark against other asset class alternatives.  This stems from a mindset of viewing cash in terms of its optionality.  From a strategic perspective does it make sense for the rest of us to consider the same?