For most of September, we have been bungling through the jungle of corporate credit. Interest rates in the belly of the curve have risen by about 25 basis points since the end of August, and credit spreads have been leaking wider. The story here is probably more about rates than credit, though. Credit spreads have been following modest weakness in the equity markets, and both have improved this week. The move in interest rates has been much more pronounced, and has mirrored the strength in the dollar.

It doesn’t really feel like an economy where the dollar should be skyrocketing. Housing trends, employment growth, and general economic activity are all on the anemic side. We wouldn’t call them bad, but they certainly aren’t booming. So maybe it isn’t the dollar skyrocketing, maybe things everywhere else are cratering. Europe continues to be weak, putting further pressure on the ECB to take anti-deflationary action. Japan’s strategy of promoting inflation seems to be geared primarily towards weakening the yen. Russia is struggling with economic sanctions brought on by its extracurricular activities in the Ukraine. And finally, we had the British Pound, beaten down by concern over the Scottish Independence vote.

The Scottish question had implications well beyond the Moors, for Northern Ireland, the Basque region & Catalan to name a few. As the Euro still looks shaky in its loose confederation, many countries seem to be asking to what extent independence should be pursued rather than unity. The markets clearly prefer the stability of unity, and hope that the currencies in question have strapped on their aqualungs to survive what they hope will be temporary plunges. It was a new day yesterday, as the No votes prevailed.

Corporate bonds have probably been impacted by the locomotive breath of continued heavy supply, which abated somewhat this week. Total new issue was around $20 billion, led by $2.5 billion from Mizhuho across 4 tranches, $2.0 billion of long and very-long paper from Teachers, as it funds its acquisition of Nuveen, and $1.75 billion from Humana. None of these deals have done all that well, with spreads moving a little wider. Even though the market felt better today, it has not been a great week for credit. It’s just hard to know whether a benign credit environment will continue to prevail, or whether we will find ourselves skating away on the thin ice of a new day.

With apologies to Ian Anderson. 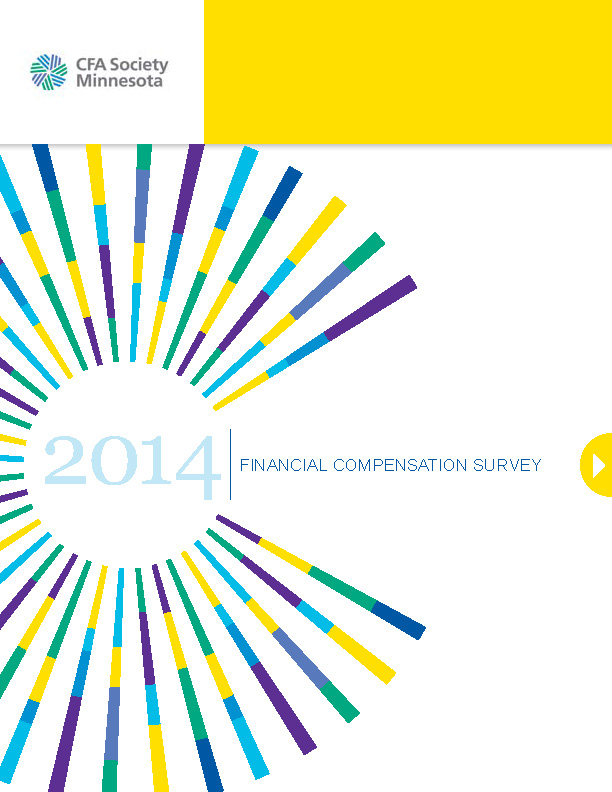 Back by Popular Demand

We’re excited to release the results of our 2014 Financial Compensation Survey, the 2nd Annual in-depth look at compensation levels in the Twin Cities and surrounding region, conducted by CFA Society Minnesota.

Click the image at right to download, at no charge, this white paper summarizing high-level survey findings in an easy-to-read format. In return for the white paper or for deeper data requests, please complete the contact form below. Your feedback is welcome and appreciated.

Thanks for your interest!

After snoozing through the last few weeks of summer, it was time to get back to business, and the Corporate Bond market wasted no time in going to the head of the class. Investment Grade supply over the past week was huge, with $45 billion in new issuance (and well over $50 billion if you included all the sovereign issuers). Over 70% of the deals were in the bank and finance space. Bank of Tokyo – Mitsubishi UFJ and its partially-owned stepchild Morgan Stanley were among the two largest issuers, bringing about $3 billion, and $2.25 billion, respectively. There were also big deals out of Bank of New York, Wells Fargo, Lloyds Bank, Standard Chartered… even little Fifth Third Bank of Cincinnati did an $850 million bank note deal.

As a result of the heavy supply, the secondary market was forced to absorb a fair amount of paper, and this pushed spreads a little wider, especially in the Bank / Finance space, which saw about 3-4 basis points of widening on the week. Not a huge change, but enough to put spreads at the wide end of the very narrow, 5-10 basis points range where they’ve been stuck for most of the summer.

In all the excitement, we almost forgot JPMorgan. JPM issued $3 billion of subordinated holding company debt to start the week. This was a 10 year deal, priced at a spread of +153 (and has traded wider by a few basis points). Even though the FDIC Single Point of Entry (SPOE) rules for a bank holding company debt requirement remain under consideration, we have seen continued supply of bonds which we think might fill some gaps in this area. Depending on how the rules turn out. Which we don’t know yet. Did we miss something while on summer vacation? Banks are not usually big third quarter issuers; it is almost as though they have seen the answers to the test.

So, class, what do you think? Are bank issuers trying to fill their SPOE buckets before the rest of us even know where our new lockers are?