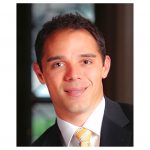 Though many aspects of my golf game frustrate me to no end, I did discover early on an ability to hit the driver a pretty long way. This realization formed a tightly held belief that my distance with that club would be an advantage on par 5s (the longest holes on the course). Using that advantage as much as possible would clearly be the best way to reach my full potential as a golfer, so I decided I would pull out the “big dog,” as my son Andrew calls it, on the tee of every par 5.

Further strengthening my commitment to this approach was the ever-present, if unlikely, chance at an eagle putt – most commonly achieved by reaching the putting green of a par 5 in two shots. The inconvenient fact that I have only carded a handful of eagles in my life never seemed to be relevant information.

As time went on, it was surprising to look back and realize how poorly I was actually performing on par 5s. Following a particularly frustrating summer of golf a few years ago, I swore off using my driver on par 5s. For three straight rounds I switched to a 5-iron off the tee. My scores dramatically improved.

This created a very uncomfortable conflict for me. My established belief of where I owned an edge over most players was now squarely at odds with the empirical facts of my scores. I was experiencing cognitive dissonance.

The Theory of Cognitive Dissonance
Leon Festinger offered his theory of cognitive dissonance in 1957. He proposed that individuals have a powerful motivation to maintain cognitive consistency – that is to ensure beliefs and facts/experiences are in agreement. When these don’t align, the uncomfortable experience of cognitive dissonance occurs. The motivation to reconcile this discomfort leads one to actively avoid or reduce the inconsistency, many times by ignoring or rationalizing facts and experiences that cause the internal conflict.

Like staring at my scorecards and realizing the driver wasn’t providing the advantage I expected, there is empirical data with respect to investing and performance that is likely to make many of us uncomfortable. It cuts against the prevailing behavior of investors and it could bring you face-to-face with your own episode of cognitive dissonance.

Chasing manager performance does not work.

In fact, not only does it not improve results, there is evidence to suggest that approach actually degrades performance. It isn’t even a coin toss. And yet, the practice of selling “under-performing” strategies and replacing them with strategies that have “outperformed” persists. (Side note: There are several behavioral reasons for this tendency, such as recency bias, which are beyond the scope of this writing. This isn’t an attempt to explain why this pattern occurs; just that it lacks merit when viewed objectively.) 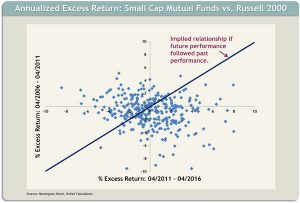 The blue line represents the implied performance chasing belief system – a world where both under-performance and out-performance persist in future periods in perfect linear harmony. For the efficacy of that belief to be confirmed by the data, you would expect to see a clustering of dots around this line. It is obvious at first glance there is no discernible pattern between the two periods of time. (Note for math geeks: the best fit line is actually negative, though the r-squared factor is only 0.02.) There is no statistical relationship between past and future 5-year excess returns in this sample.

Feeling the dissonance yet?
Because we observe capital generally flowing into funds that have performed well recently and away from funds that have not, measuring the difference between dollar-weighted (investor) returns and time-weighted returns is a great way to determine how investors have fared in timing their investments using what appears to be a performance chasing approach. Investor returns include the effects of asset flows into and out of a fund. Time-weighted returns represent the pure return of the fund, offsetting the effects of capital flows.

In other words, what is the impact on returns when investors behave as if the blue line in Figure 1 is reality?

This column chart plotting the investor return gap for each of the funds indicates an average gap of -2.17% annually over the 10-year period. The median gap is -1.91%, confirming the average is minimally influenced by outliers. While acknowledging several factors can impact this gap (for instance, this does not account for capital that leaves this group of mutual funds), the results clearly show poor timing decisions on balance. Nearly 15% of this sample group of funds has an investor return gap of -5% or worse annually over 10 years!

Perhaps ironically, an attempt to invest with managers that outperform their benchmarks is leading to a behavior that can inflict more damage on investor returns than failing to succeed in that endeavor. Over this period, the average fund in this sample experienced a total return of 5.11%. The iShares Russell 2000 Index ETF returned 5.42%. Investors in the funds captured an average 2.94% return.

It is worth mentioning there are valid reasons to invest in a fund that has experienced strong recent gains. There are also legitimate reasons to move on from a fund that has under-performed. Just realize the opposite is also true. Look back at Figure 1 and notice how many funds shifted from strong to weak relative performance and vice versa.

Conclusion
The bottom line is this: recent performance should be de-emphasized, and maybe even ignored, in the manager selection decision-making process. Instead, a long-term perspective, alignment of interests, full-cycle and rolling performance evaluations and starting valuations are more relevant in determining a thoughtful forward-looking investment allocation.

If you see me at the course this summer, there is a strong probability you’ll see a driver in my hand on par 5s. Some beliefs die hard, and besides, I might reach the green for an eagle putt! Shedding light on cognitive dissonance is one thing; dealing with it and changing behavior is an entirely different matter. In this case, simply avoiding the use of 1, 3 or even 5-year trailing performance as primary influences on manager decisions is a good start in closing the persistent investor return gap.

Jared Nishida, CFA is a Senior Investment Strategist & Oxford Investment Fellow at Oxford Financial Group. The above commentary represent the opinions of the authors as of 5.31.16 and are subject to change at any time due to market or economic conditions or other factors. 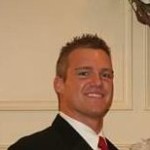 I’ve tried to make the case that the legitimacy of non-GAAP measures is dependent on the individual company, the business model, the competitive environment, the management team, etc. There is no one-size-fits-all approach. While that will bother investors who want an easy answer, it’s reality. For those investors who want a quick guide to thinking and interpreting non-GAAP measures, I have compiled a quick guide of questions to ask on each topic.

Usually, debt retirement is a one-time event since I rarely see consistent debt retirement in material amounts. The key is to look into the future and try to anticipate these costs in advance and work them into your analysis. If it appears that a debt exchange or swap will have material consequences, it’s better to know about it before than after. Again, not a meaningful issue.

Depends on the litigious nature of the industry and legal history of the company. For example, constant litigation has hammered big banks since the financial crises. Are these expenses recurring in nature? In banking, I believe they are recurring, but not to the extent of the past five years. Investors would be wise to assume some normal, ongoing expense into the future. The seeds of the next legal war are being planted today, so reserve for them today.

In addition, some companies have one-time, but massive penalties. BP comes to mind. How should investors handle that expense? I would again advise incorporating some reserve expense for future disasters in future cash flows since energy E&P is an unpredictable and volatile endeavor. Of course, this is not an exact science so it will be a subjective guess. But it’s more preferable than ignoring these realities and assuming the good times will last.

There are two lines of thinking I use as I approach an impairment situation. First, an impairment is nothing more than the final admission and confirmation that a company overpaid on an asset or acquisition in the past. It’s simple. They paid too much. Companies will argue that any specific impairment charge will not continue in the future. I agree with them. However, the key is that a company with repeated asset write-downs will likely continue making bad acquisitions and will suffer future impairments. Of course, no company will ever admit to that.

In 99.9% of cases, depreciation is a real expense.  If a company is reconciling to EBITDA, that’s fine. The issues with EBITDA are another topic. But if a company is adding back depreciation expense to net income, that’s a red flag. The common exception is excess depreciation on assets that have longer useful lives than GAAP dictates. This is rare in my experience. However, company managements will often claim longer useful lives than normal, knowing that the future costs and reinvestment won’t hit until the future. MLP’s are a great example of trying to push the belief that maintenance capex and associated depreciation is much lower than GAAP suggests. There may be some exceptions, but that’s usually pure marketing spin.

Look over the past 5 to 10 years and see if the company is a serial acquirer. If they are, include acquisition costs in earnings. It’s a core part of their strategy, and the costs need to be counted. Check to see if it is a “one-off” acquisition that was not made in place of real capex. Acquisitions are often another form of capex needed by companies to remain competitive; however, most analysts treat them as incremental, instead of replacement investment. How do you tell the difference? Look at the competitive nature of the industry and barriers to entry. Most companies need to continually reinvest just to stay in place. If this is the case, an acquisition is likely a “replacement” style expenditure. In addition, if the growth and earnings expectations of the company is dependent on future acquisitions, the future costs need to be included in company valuation.

Gain/Loss on Sale of Assets

This is one charge that is more likely to be non-recurring since so few companies consistently buy and sell assets on a regular basis. Most of these adjustments have less impact than some other big adjustments, and as long as companies are treating both gains and losses in the same manner, there isn’t an issue.

Just like restructuring charges, these are more recurring in nature than one-off. Many companies I analyze follow a predictable pattern of overexpansion during the good times followed by restructuring/realignment/right-sizing charges in the downtime. So when times are good, especially for cyclical companies like mining and energy, understand those results are likely biased too high. Don’t believe the “this is permanently higher” marketing. Investors should focus on a “normalized” earnings approach, as cyclical companies like mining, agriculture, and energy always correct.

Non-GAAP metrics are useful because they enable better fundamental understanding of the core business. It’s the investor’s job to figure out what is legitimate vs. non-legitimate. It’s not the fault of GAAP, FASB, the SEC, or any other regulatory body. They are doing the best they can to create principles and rules to fit all companies. Quite a tough task. The incessant bashing on the faults of GAAP is misplaced; it’s just the reality of trying to fit diverse companies into one system. Non-GAAP earnings are not bad, and neither are most managements. What’s bad is investor’s blind acceptance of other’s ideas without doing the necessary work themselves.