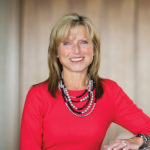 Carol Schleif is everything a role model for young professionals should be. With her dedication and go-getter attitude, Schleif has swiftly climbed the financial ladder to her current position as Deputy Chief Investment Officer at Abbot Downing; which was recognized as The Best National Private Asset Manager by Family Wealth Report Awards in 2016. But, where did her career in the financial industry start?

While studying equestrian science at William Woods University with hopes to become a horse trainer, Schleif decided to explore other options and found herself fascinated with her economics and marketing classes. In ‘83 she had graduated in an impressive three years with two degrees: one being equestrian science, the other being business administration.

She landed her first job as an Administrative Assistant with Edward D. Jones in Missouri. One of her more interesting duties for this position was clipping obituaries from local newspapers to prospect widows. “Not for me,” she decided. One thing Schleif did take away from this position was that when she had to make calls to the home office, she noticed, “The only people that ever knew what was going on were the folks in the research department.” So she decided to move home and pursue her interest in research departments.

Schleif then almost immediately started her next job at Piper Jaffray as a Market Strategist and started working on her Chartered Financial Analyst designation right away. After three years of industrious dedication, she distinguishably passed her CFA exams in ‘86.  When it was time to move on from her position at Piper in ‘87, she went on to work various positions such as Vice President and Research Analyst for First Trust, Director of Research at John G. Kinard & Co., and ultimately recruited by Lowry Hill, Abbot Downing’s predecessor, and has been there ever since. Schleif strived to incorporate her interests in economics, writing and strategy into her various positions. Along the way, she also stressed the importance of a well-developed research department and the respect it could bring to the company. It is clear to see that with each position, Schleif both learned more about the industry and contributed to the betterment of each company.

Where is Schleif currently at in her career and how was she been so successful?

Schleif currently holds the important position of Deputy Chief Investment Officer at Abbot Downing. Some of her duties include: creating and communicating the firm’s Asset Management Strategy, managing client relationships, and business development. On top of this, she serves on the firm’s Asset Allocation, Investment Themes, Investment Governance, Editorial and Publications Committees. She is a published writer and in 2016 was a Top Women in Finance Honoree. After having a conversation with her, it was obvious to see how much Schleif truly loves and is passionate about her job. She says, “I love my job. It’s a fascinating business and I feel fortunate to be able to do it here in the Midwest.”

In addition to her passion, her merit has contributed greatly to her success. She distinguishably graduated as Valedictorian of her high school class and Salutatorian of her college class. Schleif also stresses the importance of reading. Every day, she reads a variety of material such as Psychology Today, The Financial Journal, local papers, and New York Times. Schleif describes herself as a planner and goal setter. She explained, “Every year I try to look at what I’ve done and what has worked and what hasn’t. Then, I try to get better.” She even sets her computer password to a goal or aspiration she has, so every day she is reminded of it.

What has it been like to be a successful woman in the male-dominated financial industry, and what kind of advice does Schleif have for young women pursuing similar careers in investments?

Schleif sees a substantial benefit of being a woman in the world of investments. She says, “We bring a whole different level of analysis and emotional intelligence, skills and perception.” Nowadays, with more and more companies focusing on cognitive diversity, it is important to have women bringing their strengths into the investment field. However, Schleif believes a significant reason why more women are not pursuing these types of careers is because there is not a “cool depiction” in the media of women in financial positions. She points out that the only fun female role in “The Wolf of Wall Street” is Margot Robbie in a bubble bath.

While there is a substantial need for women in positions such as Wealth Managers, Asset Managers, and Advisors, they are not pursuing these careers. Schleif states, “The growth of women in the financial industry has been flat compared to other industries. We need to get the message out there that these really are viable careers.” She has been discussing with other women in the industry on how to get this message out and inspire women to consider these positions. As a grandmother to three granddaughters, Schleif strives to set the example that women really can be successful in this industry. Seeing the growth of women in the industry remain flat, and with her granddaughters as inspiration, she says, “I don’t dare retire until we move that needle a little further.”

What final advice does Schleif have for young professionals seeking jobs in the financial industry?

As a mentor with CFA Society Minnesota, and a member of the Board of Trustees at the College of Saint Benedict, Schleif is passionate about helping young professionals get started in their careers. She has a lot of hope and sees considerable potential in these younger generations.

One of her favorite quotes is, “Long days, short years.” While approaching 35 years in the industry, she explains this as the perception that some days can feel never-ending, especially when clipping obituaries from newspapers. However, 35 years, several positions, multiple publications, three children, and three grandchildren later, the time surely does seems to fly. So, as Schleif has modeled, do what you love and what you are good at, and don’t forget to enjoy it along the way. Success will follow, as it has clearly done for her.

Maria Vitale is a sophomore at the University of St. Thomas studying Economics and Political Science. She grew up in Stillwater, Minnesota and plans on pursuing careers in the financial industry upon graduating in 2020. Maria hopes to incorporate her passion for writing in any position that her career path may take her.